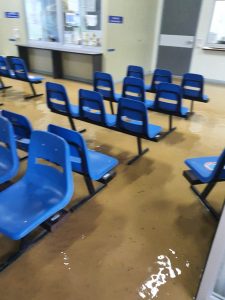 (CRHoy.com) The Costa Rican Social Security Fund (CCSS) reported that 21 health centers remain without providing services due to the effects suffered by the heavy rains since last Thursday.

In this way, in the region Huetar Atlántica, which has been one of the most affected by the accumulation of water, 20 health services are reported closed due to access problems or flooding.

Likewise, in the Huetar Norte region, lThe headquarters of the Ebais de Katira is kept without paying attention.

In this same region, despite the difficult situation due to the floods in Guatuso, the health area managed to enable the emergency service.

In the South Central, the William Allen Hospital in Turrialba works normally. For Tuesday it is estimated that a team from the Infrastructure and Technologies Management will assess the risk of landslide.

In the North Central region, the Horquetas de Río Frío health area works normally and as for the Puerto Viejo clinic, the emergency service has moved to La Guaria.

The health services in the regions of the Central Pacific, Central South and Brunca work without affectation.

How to Strengthen the Mental Health of Children and Adolescents