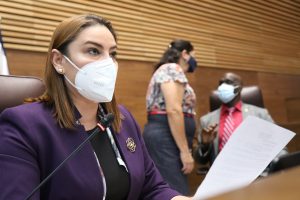 The deputy Ana Lucía Delgado, of the PLN, said that the game requires a detailed analysis. (File / CRH)

(CRHoy.com) -The ¢ 1,500 million additional requests that the Government requests from the Legislative Assembly for the Costa Rican Railway Institute (Incofer) would be financed with more public debt.

This was warned by the deputy Ana Lucia Delgado, of the National Liberation Party (PLN) and president of the Tax Affairs Commission congressional.

According to the legislator, the item included in the fifth extraordinary budget 2021 should be carefully and carefully reviewed because the Government intends to finance it with more internal public debt.

He explained that it would not only constitute a capital transfer because he now intends to distribute ¢ 950 million to operating expenses (current transfer) and ¢ 550 million to capital expenditures.

“With which it is important to verify again the scope of this transfer, since it represents more than 30% from that provided in the 2021 regular budget to an institution that maintains surplus and its budget execution not optimalDelgado said.

From this point of view, he stated that it is a priority of the Tax Affairs Committee to analyze compliance with the fiscal rule in the request made by the Executive power in the new extraordinary budget that he sent to Congress.

The budget incorporates expenses for a net amount of ¢ 77,581 million.

Get to Know About Famous Literary Works of Costa Rica