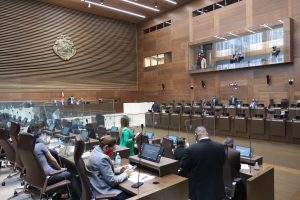 (CRHoy.com) The candidate for alternate magistrate of the Third Chamber of the Supreme Court of Justice, Patricia Vargas González, resigned his application for this position.

By means of a note sent to the president of the Legislative Assembly, Silvia Hernandez Sanchez, Vargas González asked to be excluded from the next votes for the position, since it was recently aired that among the deputies “There are reservations” regarding her person because she is “known” to former magistrate José Manuel Arroyo Gutiérrez, who was President of that Court and Vice President of the Court.

Vargas González resigned her candidacy for this position despite, she said, being the candidate with the highest qualification after the selection process in the Congressional Appointments Committee.

She regretted that, in her case, it was allegedly aspects that were alien to her that were taken into account by the congressmen.

“Again, not having the confidence of parliament because of“ being close ”to a former magistrate —as if I were not a person who has been trained for decades to hold office; that she has shown signs of personal and labor independence and that she has had (for those deputies who are only concerned about this) closeness, as a lawyer, with other magistrates in addition to Mr. Arroyo Gutiérrez – it is unacceptable from all on point of view, ”Vargas said.

He also urged Congress to move towards a reform to vary the selection process for magistrates.

You can see Vargas González’s letter in this file. Resignation of alternate contest, Third Room

Incentive spending decreased 0.5% during the first quarter of the year

New Catalog Will Verify the Authenticity of Costa Rican Honey