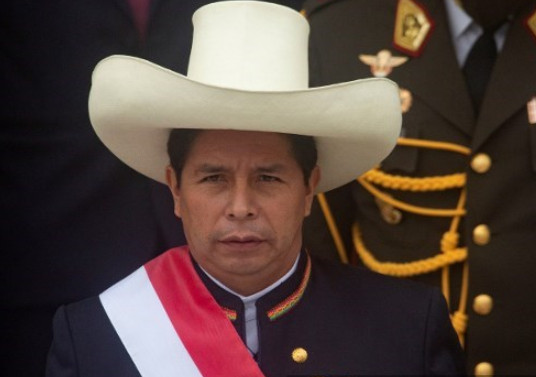 (AFP) .-The new president of Peru, the leftist Pedro Castillo, announced in his first speech that send to Congress a bill to reform the Constitution, after assuming power on Wednesday amid a climate of hope for one half of his compatriots and fear for the other.

After stating that Peru cannot be “condemned to remain a prisoner” of the Constitution promulgated in 1993 by then-President Alberto FujimoriCastillo announced that “we will present to Congress a bill to reform it which, after being debated by Parliament, we hope that it will be approved and then submitted to a popular referendum.”

Castillo’s campaign proposal to change the current Constitution, which favors economic liberalism, was rejected by his rival in the June 6 ballot, the right-wing candidate Keiko Fujimori, daughter of the former president, and by other political adversaries.

“We will insist on this proposal, but within the legal framework that the Constitution provides. We will have to reconcile positions with Congress, ”said Castillo, whose Peru Libre party has only 37 of the 130 seats.

The rural teacher was sworn in as the new president for the period 2021-2026 by the head of Congress, the opposition María del Carmen Alva, who also placed the bicolor presidential sash on him.

Dressed in a black Andean dress with embroidery and his classic white high-top hat from his native Cajamarca (north), Castillo walked to Parliament hand in hand with his wife, Lilia Paredes, from the Torre Tagle Palace, the seat of the Chancellery, distant four blocks.

In his first speech, he also announced that he will not direct the country from the Palace of Pizarro, the government house, as he plans to turn it into a museum, and that at the end of his term he will resume his “usual teaching duties.”

“I will not rule from the House of Pizarro, because I think we have to break with colonial symbols. We will cede this Palace to the new Ministry of Cultures so that it can be used as a museum that shows our history, ”he said.

“During the electoral campaign it was said that we are going to expropriate. It is totally false order, “he declared in another part of his message, although he affirmed that he seeks a” new pact with private investors. “

Three days of ceremonies will mark the inauguration of Castillo, who is challenged to overcome the covid pandemic, reactivate the economy and end the political upheavals that led the country to have three presidents in November 2020.

Many streets in the center of Lima were surrounded by the police, who deployed 10,000 agents, while dozens of Castillo supporters showed their support.

Visit of the Foreign Minister of Maduro

Castillo took office amid the hopes of thousands of compatriots, but also concern from the private sector and a large part of Peruvians who fear a sharp turn towards socialism after three decades of liberal policies.

Three hours after the swearing in, the Foreign Minister of the Venezuelan government of Nicolás Maduro, Jorge Arreaza, arrived in Lima, the state agency Andina reported. His visit marks a turn in the foreign policy of Lima, which in 2019 recognized the opposition Juan Guaidó as the legitimate Venezuelan ruler, like 60 other countries.

Venezuela was a recurring theme in the ballot campaign, as the candidate Fujimori affirmed that Castillo intended to follow in Maduro’s footsteps, although the now president denied being “Chavista” or wanting to copy the Venezuelan model.

Castillo received a phone call on Monday from the head of US diplomacy, Antony Blinken, who, in addition to congratulating him, told him that Washington expects from him “a constructive role” regarding Venezuela, Cuba and Nicaragua.

The swearing in was attended by King Felipe VI of Spain, five presidents (Argentina, Bolivia, Colombia, Chile and Ecuador) and two vice presidents (Brazil and Uruguay), as well as an envoy from the US President, Joe Biden, the Secretary of Education, Miguel Cardona.

“We have wished President Castillo the best of luck, because if the Peru“We are all doing well,” said Chilean President Sebastián Piñera after meeting with him.

Also attending the ceremony was former Bolivian president Evo Morales, whom some compare to Castillo because of their rural origins.

The new 51-year-old president is Catholic and opposed to abortion and same-sex unions. He gained notoriety in 2017 by leading a teachers’ strike.

Castillo is “the first poor president of Peru,” analyst Hugo Otero told AFP, stressing that his greatest challenge will be “not to disappoint the people who need quick responses” to the economic crisis and the pandemic.

Castillo must appoint his chief of staff and ministers at any time.

The new president and several dignitaries will travel to the Andean city of Ayacucho on Thursday for a symbolic swearing-in in the Pampa de la Quinua, scene of the battle of Ayacucho on December 9, 1824, which sealed the independence of Peru and all of Spanish America. .

Castillo will lead a military parade in Lima on Friday.

Costa Rica: a “Sanctuary of Well-Being” and Nature