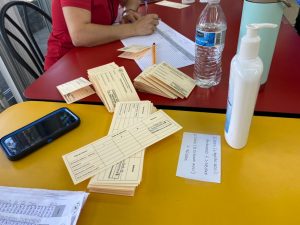 (CRHoy.com) .- The Medical Manager of the Costa Rican Social Security Fund (CCSS) announced that they have been placed around de 130 thousand vaccines of those donated by the United States.

According to Ruiz, from Friday July 16 When the campaign that included group 5 began, it was possible to vaccinate this number of people due to the response and acceptance that the immunization campaign has had.

“We estimate that around 130,000 vaccines have been placed since Friday, when the group was opened,” Ruiz said.

However, in several health areas, mainly in central hospitals, it has been reported that the doses delivered are insufficient for the large number of people arriving and that for that reason, the campaign will not be available for this whole week, as it had been proposed at the beginning.

The CCSS Manager justified this situation by ensuring that doses were evenly distributed and the supply of these depends on the number of people who get to get the vaccine during the day.

“The vaccines were distributed equitably in each health area, but behaviors in each area are different. So at this moment what we are interested in is that they are placed as quickly as possible, ”said Mario Ruiz.