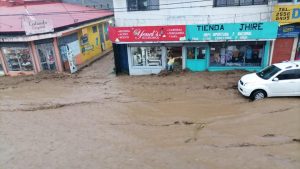 The CNE said that heavy rains have occurred in the early morning and early hours of the morning. (Courtesy).

(CRHoy.com) -A total of 1,800 flood eventsDue to the heavy rains that prevail in the country, the National Commission for Risk Prevention and Emergency Care (CNE).

This was reported this Saturday by the entity’s Chief of Operations, Sigifredo Pérez, who indicated that there are currently 862 people in 23 shelters.

However, he clarified that this number may vary because the teams are in rescue and evacuation work in risk areas that are flooded.

He assured that the Emergency Operations Center assesses the conditions of the North Zone.

The official added that the CNE raises a red alert for Talamanca, Limón, Matina, Sarapiquí and Turrialba.

The impact of the Anthropocene on the global climate

record eruption at the Turrialba volcano