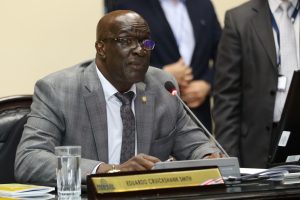 The head of the PRN, Eduardo Cruickshank, criticized the constant increases in fuel prices. (File / CRH).

(CRHoy.com) -The head of the parliamentary fraction of the National Restoration Party (PRN), Eduardo Cruickshank, lashed out the last increase in the price of fuels approved by the Regulatory Authority of Public Services (Aresep).

“Where does this PAC government want to take the people? Until when President?“Said the legislator.

The former president of Congress recalled that the National Restoration legislative bench presented a bill to halve the Single tax to fuels for two years and thus reduce the cost of hydrocarbons.

However, he maintained that the President of the Republic, Carlos Alvarado, has not wanted to summon it in the extraordinary sessions of the Legislative Assembly, which will conclude next week.

rains will continue tomorrow but will be of lesser magnitude