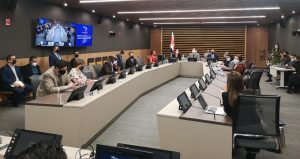 (CRHoy.com) -By majority, the Tax Affairs Commission Congress rejected this Wednesday the settlement of the 2020 regular budget presented by the Executive power.

This was confirmed by the deputy Ana Lucia Delgado, of the National Liberation Party (PLN) and president of that legislative body.

He explained that 9 of 11 legislators approved the negative majority report which recommended rejecting the budget liquidation, as was also raised by the Comptroller General of the Republic (CGR).

“A series of provisions were made that are being transferred to the Legislative Plenary, so that, if approved, these provisions can be transferred to the ministries of tax authorities, National Planning and Economic Policy (Mideplan) and the Comptroller’s Office to initiate processes necessary to make the information transparent and unify, and to solve the registration needs that have been presented within the budget verification processes, ”Delgado said.

The Comptroller’s Office recommended on July 13 to reject the 2020 budget settlement because they persist misclassification, unrecorded resources and uncertainty about some figures.

This, according to the CGR, makes financial management and control of public resources.