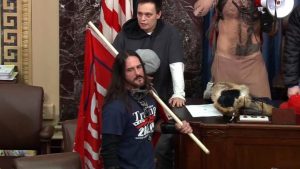 Photo from The New York Times

(AFP) – A man from Florida was sentenced on Monday for a Washington court to eight months in prison for participating in the assault on the Capitol on January 6, in the first jail sentence since the attack that shook American democracy.

Paul Hodgkins, 38, stormed along with hundreds of other supporters of then-President Donald Trump at the headquarters of Congress, when congressmen certified the victory of Democrat Joe Biden in the presidential elections, the Department of Justice said in a statement.

Photos show the bearded man with long hair in the Senate Chamber, with ski goggles around his neck and carrying a large flag in support of the former Republican president.

After having been arrested on February 16 after being reported, Hodgkins pleaded guilty to obstructing official proceedings, for which the federal prosecutor requested an 18-month prison sentence.

According to court documents, Hodgkins entered the Capitol with a backpack containing goggles, ropes and latex gloves, among other items. He managed to enter the hemicycle, where a photograph was taken.

However, the prosecution admitted that Hodgkins “He did not personally participate in the violence or destruction of property or foment violence” and that he had “accepted responsibility very early.” He also spent less than half an hour at the Capitol.

From January 6, more than 535 protesters have been arrested across the country for participating in the assault on the US Congress and more than 165 have been indicted.