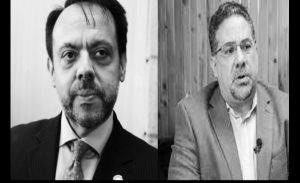 (CRHoy.com) When the river sounds… ..stones bring, the popular saying goes. Since the night of this Monday, strong versions of unofficial sources ran in the Presidential House and the Ministry of Foreign Trade (Comex) that the president, Carlos Alvarado Quesada would already have the new representatives of Costa Rica to the Organization for Economic Cooperation and Development (OECD) and to the Central American Bank for Economic Integration (CABEI).

The candidates would be the former Minister of Foreign Trade, Alexander Mora Delgado (OECD) and the current Director of Intelligence and Security (DIS), Eduardo Trejos Lalli (CABEI). If these appointments are made, this could reignite the relationship between the Alvarado government and the opposition, since both leaders have questions about their respective efforts on their backs.

Mora was questioned because when he left the government of Luis Guillermo Solís Rivera (2014-2018) He did not want to return ¢ 29 million that he received in bonuses that did not correspond during that administration and for which there is a judicial process for its recovery. In the case of Trejos Lalli there are criticisms, since since August 2018 He is in debt to a reform project of the DIS that Alvarado asked him after appointing him to that controversial police unit of the Presidential House and for having been accused of mistreatment when he was ambassador to Nicaragua in the past government. (see separate details below).

CRHoy.com consulted the Presidency of the Republic about these appointments, the response through the Ministry of Communication, led by Agustín Castro, was a brief reply on Monday night. “The Government does not have any change to communicate, as soon as we have information to release on the subject, we will send it to them,” they responded.

However, it was not possible to verify the version of Mora Delgado or Trejos Lalli or the Minister of Commerce, Andrés Valenciano, Minister Rector of the OECD.

The ¢ 29 million of discord

In May 2019, a year after Alexander Mora left Comex, the Attorney General’s Office (PGR) began a Lawsuit against the former minister to recover the ¢ 29 million that the ex-hierarch took for bonuses during the last administration, and that he should not collect since he did not have the requirements for it.

The lawsuit sought the nullity of the administrative act by which the former minister was recognized the payment of 65% for the prohibition bonus during the first three years of the Solís Rivera government. The institution has not reported the status of the complaint.

The lawsuit against Mora by the PGR was prepared after in February 2019 the Comex asked the PGR for its help to start a Contentious Process for Lesividad.

The president would place Trejos Lalli in CABEI even though the current DIS chief is in debt to the bill that Alvarado entrusted to him.

Over the last three years and two months, Lalli has requested extensions to present this project, but continues to fail to comply.

Trejos has also been questioned in his work to protect the president, as his decisions repeatedly exposed the President’s integrity during demonstrations.

In addition to this, in the last administration when he was ambassador to Nicaragua, Trejos Lalli was accused of alleged mistreatment by the former counselor, Natalia Rojas. He was also questioned because in May 2017 former President Solís had to make him a public exhortation to pay ¢ 9 million that he owed for his son’s pension. Solís said at the time that he was urging him to fix the situation with his sentimental ex-partner so that “the conflict does not take on other dimensions that could have affected the country’s international reputation.”

Web Conference with Legendary Space Artist Vincent Di Fate: How the Future Was