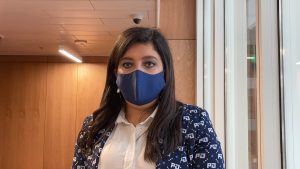 Pilar Garrido, Minister of Planning and coordinator of the economic team (CRH)

(CRHoy.com) “They are the projects that are and the consensus that exists what build and the modifications will be within the framework of the commissions ”.

In this way, the Minister of Planning and Coordinator of the Government’s Economic Team, Pilar Garrido, ruled out that the government is going to alter its commitments with the International Monetary Fund (IMF). The hierarch ruled out that, in the midst of the opposition that faces this agenda of projects in Congress, the Executive Power is going to propose different initiatives.

After the final approval of the loan with the IMF for $ 1,778 million, the government of Carlos Alvarado explores the scenario in Congress to approve the 7 projects with which it committed to the IMF, which must be approved no later than next October , when this body makes its review of these commitments as condition for the second disbursement of the loan.

Minister Garrido is clear that the conditions as of August will change and will not necessarily favor the government. As of August 1, the Congress will be in Ordinary Sessions and unlike the last 8 months of Extraordinary Sessions You will no longer be able to define the agenda for the projects to be discussed for the deputies, but it will be the congressmen who decide what to discuss and what not.

In this different scenario and with the IMF’s agenda uphill, the minister now speaks of “Redouble efforts” to build consensus and generate a dialogue with the opposition and suggests “the construction of a shared agenda”– between the government and the opposition – for the approval of the IMF agenda.

“We hope that this agenda is approved, because this is a critical issue for our country, it is to give investors confidence, because nothing worse than negotiating an agreement with the IMF and not being able to consolidate it, due to the message it sends to the international community ”Said Garrido.

Regarding the changes that the texts of the projects committed to the IMF may have, Garrido said that the Executive Power It will ensure that tax returns are maintained so as not to affect the commitment to the agreement and reach the goal, in 2023, of a 1% primary surplus.

Garrido said the government would support the creation of a special commission to rule on all 7 projects of the agenda with the IMF, but said that it will be a decision that the deputies will have to take.

The minister said that for the Executive the three priority initiatives of the 7 that make up the agreement with the IMF They are the second debate of the draft Public Employment Law – currently under consultation in Room IV-, the Global Income plan and the plan to eliminate tax exemptions.

Since January when it signed the agreement with the IMF, the government has been constantly changing dates regarding the deadline to approve the project agenda requested by this body. First he pointed to June, but as the first days of that month passed, he said it could be until the end of it. With the arrival of July, Garrido spoke of October.

The government committed to the IMF with 7 bills. Of the 7 legislative files, 4 are for the creation of more taxes.

These are the projects committed to the IMF

#This is how cardiopulmonary resuscitation is done

Guanacastecos are upset with Carlos Alvarado