(CRHoy.con) Historic, for the first time a Costa Rican judoka achieves a victory in the Olympic Games.

Ian Ignacio Sancho debuted with a win this Saturday in Tokyo, by defeating Indrit Cullhaj of Albania.

Sancho during the combat, it had to be treated for a cut on his left hand, but that didn’t stop him. 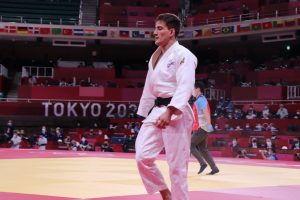 Ian Ignacio returned with motivation to the top and managed to get the point that gave him the possibility of defeating Indrit, who left the compound on a stretcher.

Sancho who has several years of living and training in Japan wrote a chapter in the history of the national sport in an Olympics.

Now Ian Ignacio must face the Korean Baul An, a fight that if he wins it could bring him closer to fighting for a medal in the -66 kilogram category.

5 Things you need to know about Costa Rica

The 5 letters that Luis Fernando Suárez still has not tried

Older Adults Can Prevent Diabetes by Increasing Their Muscle Mass