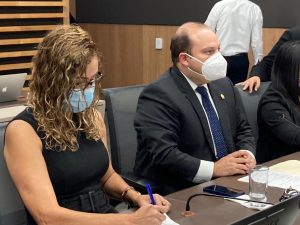 (CRHoy.com) This Thursday the confrontation that was planned between the auditors of the Ministry of Public Works and Transport (Mopt) and the National Viability Council (Conavi), Irma Gómez and Reynaldo Vargas in the commission that investigates the case of alleged corruption with road works, known as Cochineal.

The impossibility of confrontation was due to the lack of quorum in the commission. At 8 am, only 3 of the 7 deputies that make up that commission were present: its president, the Christian Socialist Pablo Abarca; the liberationist, Paola Valladares and the broad front, José María Villalta.

According to the Abarca press spokesman, José Conejo, the liberationist deputy Franggi Nicolás and the head of the New Republic, Jonathan Prendas, had permission to be absent, while the ruling party Enrique Sánchez and the National Restoration deputy, Xiomara Rodríguez, did not get to meet.

In this confrontation, the deputies wanted Gómez and Vargas to clarify the inconsistencies in their speeches about the delays in the reports that they had to prepare on this controversial case.

The hearing for the confrontation must be rescheduled. In addition, the deputies of the commission must contemplate extraordinary sessions to be able to comply with the deadline for submitting their report, which is next December.

5 Volcanoes in Costa Rica That You Have To Visit