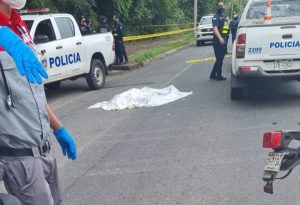 According to preliminary reports, López was to meet a friend for later go to a passing hotel in the zone. There, the friend informed the authorities through 9-1-1 that the man was behaving strangely and feeling in danger.

For that reason the Public Force went to the place and López, seeing the police presence, was scared, he broke a window and jumped out of the room he was in, located on the second floor of the motel.

After this he fled and the authorities they gave chase and after a few minutes, the police were able to find the subject. However, when he was about to be arrested, López fell to the ground and convulsed.

The Public Force called the Red Cross to attend to him, however the emergency units declared it deceased at the scene.

The OIJ reported that it is still awaitingl autopsy result, to find out what the exact causes of his death were.

Qatar advances to the semifinals by defeating a fierce Salvadoran team

Almost half of children with HIV do not have access to treatment, alerts UNAIDS