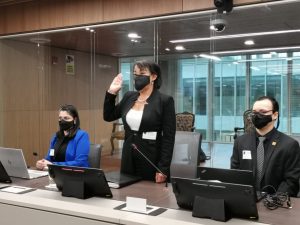 Ima Gómez, auditor of the Mopt

(CRHoy.com) The auditors of the Ministry of Public Works and Transport (Mopt) and the National Viability Council (Conavi), Irma Gómez Soto and Reynaldo Vargas Soto, they will have to face each other and clarify, before the deputies, their differences and contradictions in their arguments to justify the few results that the investigation has yielded so far in relation to the alleged case of corruption in road works, known as La Cochinilla.

The deputies of this investigative commission of this case in Congress approved a motion to run the agenda of hearings and develop a confrontation between both officials this Thursday, July 29.

What happened was that this Thursday in his hearing before the congressmen Gómez – Mopt auditor – accused Vargas of excluding her from the investigation, allegedly alleging that “he had everything covered”, since he had a team of 15 people for that work.

He also said that, despite multiple requests, Vargas has denied him information and has not authorized him to enter Conavi for the investigation ordered by Mopt Minister Rodolfo Méndez.

“The minister ordered me, on July 8, to intervene; Coordination was not possible due to the position of the Conavi auditor (…) If the minister instructs me to enter (to investigate Conavi), I enter, the problem is that the auditor does not facilitate that coordination, I cannot enter Conavi at the force, ”said Gomez.

Pablo Heriberto Abarca Mora, Social-Christian deputy and president of the commission, said that it seems that among auditors they “throw the ball”, Well, last week in that same forum, Vargas rather complained about the limited capacity for action due to the limited nature of his department.

Vargas even assured that he sent reports to the MOPT and they stayed there for months, until many of the cases prescribed, which contrasts with what Gómez said, that they have not provided him with inputs for his investigation.

Government will resort to exceptional mechanism to repair roads

FEUCR supports attention to students and communities affected by rains

Erwen Masis asks for explanations for lack of land titling