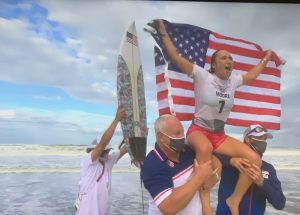 (AFP) – American Carissa Moore on Tuesday became the first Olympic champion in the history of surfing by triumphing in the women’s final, disputed in Ichinomiya (Chiba prefecture), a hundred kilometers east of Tokyo.

Moore, de 28 years old and a great favorite before the competition, in the final she dominated the South African Bianca Buitendag, who was silver. The bronze medal was obtained by the Japanese Amuro Tsuzuki.

The Carissa Moore success He arrived shortly after the Brazilian Italo Ferreira, winner in the men’s event and who had become the first Olympic gold in the history of surfing.

The professional (WSL) and amateur world (International Surfing Federation) came to an understanding to put on a show by allowing elite surfers to participate in the Tokyo Games in a natural setting.

Reflections of a Tico Tourism Student in Pandemic Times