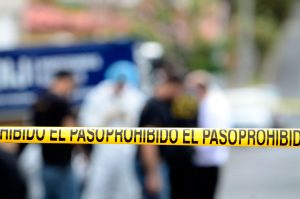 (CRHoy.com) .- A woman with surnames Serracín Caballero and a man named Araya Saldaña They will have to deduct six months of preventive detention as suspects of murdering an acquaintance of them, at dawn on July 20. to steal his belongings, reported the Public Ministry.

In a press release, the Puerto Jiménez Prosecutor’s Office, South Zone, reported that last Saturday a raid was carried out in conjunction with the Judicial Investigation Agency (OIJ) in which both were arrested.

“Apparently, the day of the facts, the defendants were sharing with the victim, Juan Luis Agüero Molina, in the early hours of the morning, at which point they allegedly hit him on the head with a piece of concrete and then they would have thrown him into the sea, where he finally died, ”the judicial authorities reported.

The OIJ and the Prosecutor’s Office reported that Serracín and Araya had taken possession of various objects owned by the offended person, including chains, rings and a watch.

“Now, the research continues in development, with the collection and analysis of evidence, as part of the preparatory stage,” they explained.

a fallacious and selfish comparison