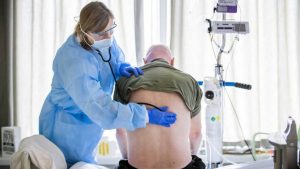 (AFP) – The Delta variant of COVID-19, highly contagious, it should become dominant in the coming months, the World Health Organization (WHO) said on Wednesday.

Delta, first identified in India, has so far been detected in 124 territories – 13 more than last week – and already represents more than three-quarters of the sequenced samples in many countries, the WHO said.

“It is expected to quickly outperform other variants and become the dominant circulating lineage in the coming months,” he said. the UN health agency in your weekly epidemiological report.

According to the sequences of SARS-CoV-2 sent to the global scientific initiative GISAID To share virus data, for four weeks through July 20, Delta’s prevalence exceeded 75% in several countries.

The organization, based in Geneva, said that in the week until July 18, a total of 3.4 million new cases of covid-19 were registered, 12% more than the previous week.

“At this rate, the cumulative number of reported cases worldwide is expected to exceed 200 million in the next three weeks“Said the WHO.

Saprissa presents its new designs for the 2021-2022 season

Costa Rica and the Caribbean, Among the International Destinations Preferred by Spaniards this summer