(CRHoy.com) The authorities arrested a subject on suspicion of being linked to the Salvadoran criminal group, Mara Salvatrucha.

According to the Migration Police, the Nicaraguan, surnames González Monge was arrested in San Carlos following an investigation by officers. 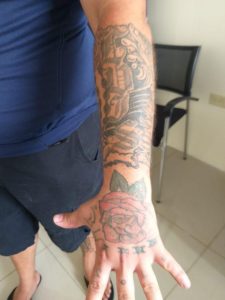 Authorities detected the man and monitored him. On his body, he exhibits multiple tattoos considered distinctive of these criminal organizations, and when conducting the analysis in security systems, it was concluded that he is an active member.

González was transferred by the San Carlos Migration officers to the Central Region Apprehension Center CARC, in the Directorate of the Professional Migration Police, where It will remain while the corresponding deportation process is being processed.

“We have been developing strategic actions, in order to detect and apprehend the members of these gangs and then carry out the corresponding operations in a timely manner, since these people are active members of these organizations, which are identified with crimes such as extortion, drug trafficking and kidnapping”Said Alonso Soto, deputy director of the Professional Migration Police.

This is the report of routes closed due to flooding

Flexibility and Its Importance for Physical Training