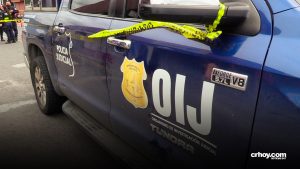 They are a 40-year-old woman and a 38-year-old man, surnamed Araya, who were arrested in raids carried out by the police authorities.

The victim’s body was found dead on Tuesday, July 20, on the beach in Puerto Jiménez. Had wounds caused with a sharp object to the head.

Apparently, in the early morning hours of that same day, the deceased and the two suspects were inside the property that was raided today. At one point, for reasons that are unknown, a fight happened in which the now deceased was injured.

Subsequently, the body was left lifeless on the beach. The suspects will now be presented to the Public ministry.

Leonel Moreira receives a game penalty for his expulsion against Jamaica