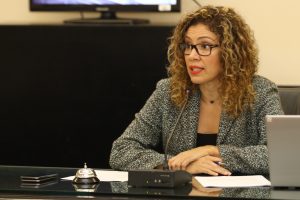 The deputy Paola Valladares, from the PLN, said she will ask for an explanation. (File / CRH).

(CRHoy.com) -The Legislative Assembly will investigate complaints on alleged violations of the rights of the workers who build the new Turrialba hospital.

This was agreed by the Special Infrastructure Commission of Congress, after approving a motion promoted by the deputy Paola Valladares, of the National Liberation Party (PLN), and president of that legislative body.

For this purpose, the legislators called to appear Jorge Granados Soto, Manager of Infrastructure and Technology of the Costa Rican Social Security Fund (CCSS), and Federico Acon, of the construction company Van der Laat y Jiménez, on a date not yet defined.

Both will have to refer to alleged anomalies in the hiring of personnel for the construction of the new medical Center.

Valladares explained that, apparently, labor rights have been violated because many workers have not received payments for weeks and others do not have the physical conditions or the times for their feeding schedules.

“Clearly from the commission I will ask for explanations, answers and solutions to those responsible, because, in addition to breaching agreements to hire labor from the region and violating labor rights, apparently it is not generating the adequate inspection of the works in a project of great importance for the cantons of Turrialba and Jiménez ”, said the congresswoman.

The new hospital -which will benefit 86 thousand insured– will be ready in 2022 and will cost $ 92 million.

Alajuelense will present its new uniforms at the beginning of September

Joel Campbell wastes no time: he already trains with Rayados