(CRHoy.com) .- The authorities of the Volcanological and Seismological Observatory of Costa Rica (Ovsicori) reported that the earthquake occurred this Wednesday afternoon in Punta Burica had its epicenter very close to what happened the previous Saturday.

Marino Protti, the entity’s seismologist explained that the earthquake occurred along the area known as Fractures of Panama.

“It is a system of faults that marks the boundary between the Coco plate and the Nazca plate. These 2 plates are rubbing laterally along a vertical fault system. The slide is vertical and the earthquake last Saturday also occurred on that fault system“, he pointed.

The expert indicated that until 6:30 pm today there were more than 20 replicas located and the largest of them occurred at 4:26 pm and had a magnitude of 5.5 degrees. 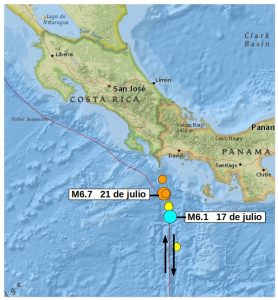 “Aftershocks will continue to occur. We cannot say of what magnitude they will be, if as part of that sequence there will be more aftershocks of moderate magnitude. However, they will continue. That is the characteristic of this fault zone ”, he added.

Furthermore, Protti said that there is still a potential earthquake risk under the Osa Peninsula, with a magnitude between 7.2 and 7.4, due to the contact of the Coco plate with the Panama plate.

“The Coco plate is being introduced below the Panama plate and has generated important earthquakes in the past, as a recurrence of the order of 40 years. We can remember earthquakes in 1904, 1941 and the last was on Holy Saturday in 1983. In an area that has a large earthquake every 40 years and the last one was 38 years ago, it is to be expected, The area has already been loaded and is practically ready for an earthquake of significant magnitude to occur in the next up to 5 yearsHe explained.

Today is the day of man’s best friend