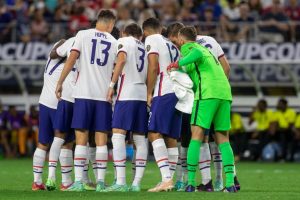 (CRHoy.com) The United States National Team the last ticket to the semifinals of the Gold Cup was left.

This Sunday night in the AT&T Stadium managed to defeat with a score of 1-0, to a fierce selection from Jamaica.

The game during the 90 minutes was full of emotions and dangerous plays in the area, but in the end it was those of the stars and stripes, those who managed to send the ball to the back of the nets.

It was until minute 83, that the zero was broken and the fans were able to celebrate the victory of the locals

Matthew Hope, 20-year-old forward, got up in the area and with an accurate header managed to break the parity on the scoreboard.

Although the goal fell like a bucket of cold water for the Caribbean, they did not stop fighting and had chances to draw, but they were not fine.

In the end, America meets the favorite poster and now he will face Qatar next Thursday, in search of a ticket to the grand final to be played in Las Vegas.

COVID-19 vaccines were stolen from a cooler

For the First Time, Costa Rica Obtains a Medal in the European Women’s Mathematics Olympiad