(CRHoy.com) Carlos Cerdas spent for the first time one night in a maximum security cell at the National Center for Specific Attention, within the western prison complex in San Rafael de Alajuela, better known as La Reforma.

From now on, you must undergo a period of isolation for the next two weeks as established by the Ministry of Health in its guidelines against COVID-19.

After that time, it will officially begin to discount as deprived of liberty the 4 months of preventive detention imposed by the Criminal Court of Finance of the II Judicial Circuit.

In the event that the administration of the Ministry of Justice decides to give the same treatment to Carlos Cerdas as well as to other inmates, the employer will not be able to receive his food brought from home every day, but must abide by the schedules established by the system of orders from the Penitentiary Police, which is every two days depending on the pavilion.

Nor will you eventually be able to receive cash.or every day for survival inside the prison. You can receive money every two days and with a maximum of ¢ 35 thousand. 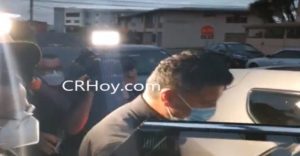 Carlos Cerdas, owner of MECO, was released from prison on June 28. CRH

You will have the possibility to go out to receive the sun once a day and by 6 pm you will have to be inside your cell to sleep.

Around it, there are prison rooms where there are more dangerous criminals, such as Marco Antonio Zamora Solórzano, alias “El Indio”, also Keylor Cole Kelly, alias “Gato Cole”, both recognized drug traffickers captured in the past by the Agency. of Judicial Investigation.

The authorities of the Ministry of Justice have already had the first complaints from prisoners who have demanded equal conditions because they allege that there are no differences between the crimes attributed to Cerdas and those of other inmates.

Even prison police have made it known to their respective headquarters who will do everything possible to enforce the protocols to Cerdas and not give him any kind of favor or special treatment.

Cerdas was taken out of judicial cells in the II Judicial Circuit of San José in Goicoechea yesterday morning. Precisely on that site, he had already begun to be insulted by other individuals, as they had already recognized him as the businessman involved in the alleged case of great national corruption.

As some OIJ jail officials told this outlet confidentially, Cerdas kept his head down at all times, without responding to the insults that were said to him.

Carlos Cerdas Araya, owner of the MECO construction company, is one of the defendants in the case investigated by the Deputy Prosecutor’s Office for Probity, Transparency and Anti-Corruption known at the police level as “Cochinilla”, and consists of an alleged bribery payment scheme for officials of the National Highway Council and the Ministry of Public Works and Transportation (Mopt).

Cerdas was arrested last Monday on public roads in the Escazú area by personnel of the Judicial Investigation Agency, after the Criminal Court of the II Judicial Circuit annulled the act that gave the accused the possibility of being free by paying a real bond for $ 5 million.

Cerdas’ attorney, Erick Ramos, has said that the most recent resolution of Judge Hugo Porter is covered by a populist line, considering the pressure of the citizens to do justice in a case of alleged corruption.