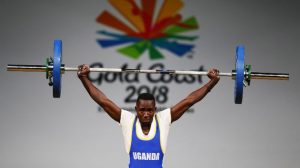 (AFP) – A Ugandan weightlifter has been located four days after he disappeared from his training camp in Japan leaving a note saying that I wanted to find a jobpolice said Tuesday.

“The man was located today in Mie Prefecture without injuries or having been involved in any crime, ”an Osaka police officer told AFP.

“He carried his own identity document and he identified himself. It is not clear who will take care of him, the team or the embassy, ​​”he added.

Alarms jumped on Friday after Julius Ssekitoleko You will not appear for a covid-19 test and you will not be found at your hotel.

The young man, 20 years old, had recently discovered that he would not be able to compete in the Tokyo Olympics, which are inaugurated on Friday, due to an Olympic quota problem.

In his bedroom he left a note asking them to send his things to his family in Uganda, according to agents from the city of Izumisano, in Osaka prefecture, where the team was concentrated before the Games.

The police claimed this Tuesday the athlete had traveled to Nagoya in central Japan and then near Gifu prefecture, before moving to Mie prefecture.

“He was found in the house of some people who had a relationship with him. He did not resist. He cooperates and we are still questioning him about his motivation, ”added the officer.

This young athlete recently won bronze at the African Weightlifting Championships and he has a wealth of experience despite his youth, Ugandan sports officials told AFP on Saturday.

In Japan, drastic restrictions have been planned for all participants in the Games, coinciding with a worsening of the health crisis in the country.

Athletes must pass daily tests and their movements are very restricted, limited to transfers between their accommodation, their training centers and their competition.

School Year in Costa Rica Will Be Suspended as of May 24th, Classes Will Return on July 12th